All you really need to know is one number. Any number. 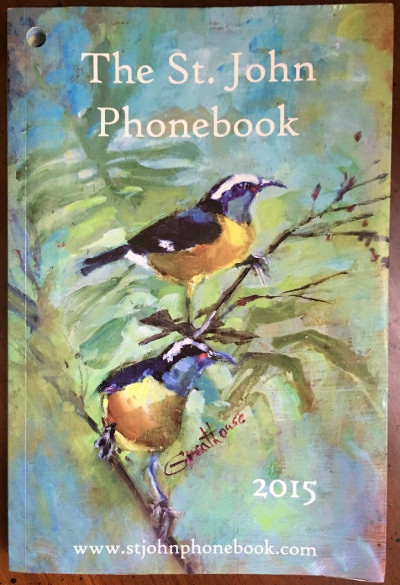 There’s one thing that bonds all residents on St. John – the local phone book. Small, yet mighty, it’s the most used item on the desk of anyone who lives here.  The hefty official phone book from the phone company covers all of the USVI, making St. John a spec in the sea of sought services. So to the little book we go, errors and all.

Any self-respecting St. John resident will have their own, highly cherished, personally edited copy of the little book. St. John is such a friendly community, I have received a wrong number from a person I actually knew on exactly 3 occasions (and was able to relay the number they needed). The population of the USVI ebbs and flows with the seasons and the economy, which leads to phone numbers being re-used fairly frequently.

I’m not privy to how local numbers are approved and dispersed, but safe to say the current number I have is the ex-phone number of a retired boat captain, for whom I receive a call at least once a week in-season. Fortunately for the caller, I know a local boat captain, who is grateful to receive these free-flowing referrals. My cell number also happens to be the same number incorrectly printed on a staff contact list for a resort on St. Thomas. I tried telling those who called about the mix-up, but nobody listened. Now I just reply to all the texts in the affirmative. Poor guy. If he lived on St. John, I could pass on the message.